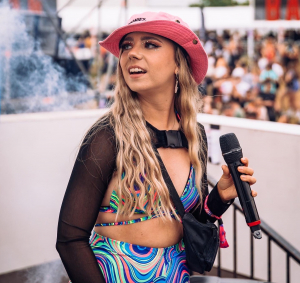 She may only be 5ft 2, but A Little Sound is an artist causing a lot of noise right now – and for all the right reasons.

Maybe you’ve had your ears perked by her dreamy vocal hooks, or maybe you’ve seen her Tik-Toks spreading the word about drum and bass. Either way, there’s a lot to love about this exciting talent. While still in her early twenties, A Little Sound has already been responsible for the vocals behind some of D&B’s biggest anthems in recent years. “Back In Time” with Kanine, “Lakota” with Technimatic, “Rum & Lime” with DJ Gaw and Selecta J-Man – the list goes on. But she’s still only just getting started.

Despite being lauded for her vocal work, which saw A Little Sound land 2nd place in DrumandBassArena’s 2021 Award for Best Vocalist, this artist has always had the ambition to be more. Singer, writer, DJ, MC, stage host – you name it, she’s pushing to do it all. It’s a motivation that first caught the eyes of the D&B community after an epic Stay At Home Festival live stream surprising everyone with her mixing and impromptu MCing, and it has since blossomed into the start of something special with bookings for standalone sets at various events, including a headline performance at the Bristol’s legendary Motion.

While D&B is firmly engrained into A Little Sound’s direction, gun fingers and basslines weren’t always in this vocalist’s path. With a background in musical theatre and a history of performing acoustic covers since the age of 11 on her Youtube channel, this self-taught musician’s career could have been very different if it wasn’t for the influence of Bristol – a city where she and Born On Road have grown together.

With a debut EP on the horizon, along with many vocal features and live performances to come, you can expect A Little Sound to only get louder as time goes on.