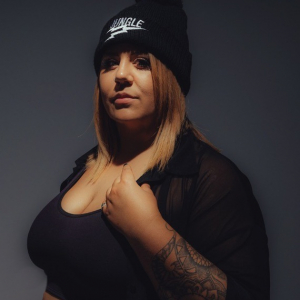 Releasing rave-ready beats on some of the most respected labels in her field – Hospital Records, Born On Road, Ruffneck Ting, Audio Addict, Deep In The Jungle, Murky Digital and incoming releases on Dread Recordings and Jungle Cakes – Euphonique’s high energy, system-shaking signature has been a key part of the D&B landscape since she first emerged in 2008.

Her style has led to frequent support and exposure across the board ever since with heavy plays on key stations such as Radio 1, 1Xtra and Radio 1 Dance; multiple award nominations at the We Love Jungle Awards and Skiddle DJ awards; collaborations with likes of Bou, Selecta J-Man, Gray, Redders, Aries, DJ Hybrid and Kelvin 373; a string of digital number 1s with her solo releases and performances at many iconic and renowned events and venues around the world.

Glastonbury to Boomtown, Loves Saves The Day to Hospitality On The Beach, Rumble In The Jungle to Fabric and far beyond, across Europe and South East Asia; Euphonique has taken her art around the world and across the airwaves. Broadcasting since ’09, she got her first show on FM at 19 on Unity Radio 92.8FM, she’s a regular on the likes of Rinse, Bloc2Bloc, Rood FM and DnB Radio and currently hosts a show with Bristol jungle pioneer Dazee on SWU.FM

A music teacher, performance mentor and lyric writer, Euphonique is motivated by empowering the next generation of artists and is a proud product of the UK free party movement’s positive DIY ethos. Driven by community and championing equality and representation across the scene, she is referenced by many as a key inspiration and mentor for young artists breaking into electronic music.

Euphonique’s brand Subwoofah was a significant Manchester hub as one of the city’s most consistent and popular D&B events (between 2010 – 2014), a thriving studio community (2017-19) where many of the scene’s leading lights would stream and record and many of the new generation would come to learn and a record label (since 2013), responsible for breaking new talent such as Epicentre, Sl8r, Motiv and K-Jah with a string of chart topping release and D&B number 1s.

Now based in Bristol, Euphonique continues to not only smash out sets at some of the best festivals and club brands throughout the UK and abroad, but continues to produce consistent quality music with some of her “Deepest and most authentic work to date” (Ray Keith) due out this year on some of the scenes biggest labels.